We are undergoing maintenance, some features may not function as expect.

We regret any inconvenience caused.

Introduction
The drones or UAVs (Unmanned Aerial Vehicles) have generated enormous interest in research world due to their unprecedented applications and potential to collect ultra-high resolution spatial information about areas which are difficult to access or even totally un-accessible. Moreover, UAVs can capture the spatial data in real time at relatively low cost and unlike satellites UAVs are independent of longer revisit times and predefine orbital restrictions (path and rows). Generally, and most importantly UAVs not effected by the clouds due to lower flight altitudes particularly tropical regions like Sri Lanka where the sky is covered with clouds most of the time. However, as this is a relatively new technology the use of UAVs in the field research is limited to specific applications and settings mainly due to limited scanners and endurance. Though UAVs provide a niche but can't replace the satellite remote-sensing completely.
The UAV

The UAV used by IWMI is eBee from SenseFly. It is a fixed wing professional mapping drone and captures high-resolution aerial photos that can be transformed in accurate orthomosaics and 3D models. The eBee can cover upto 12 km2 in a single flight and can acquire images/photos with a resolution as high as 1.5 cm if flown at lower altitudes covering smaller areas.

Once the data is captured by drone/UAV, an aerial map is prepared within 24 hours. The latest and state-of-the-art hardware and software are used to convert the images taken by drone to highly precise, georeferenced 2D maps and 3D models. 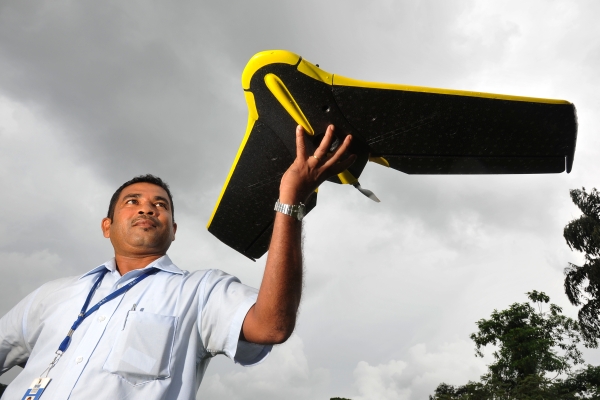